Born and raised on Sullivan's Island, South Carolina, Dottie attended school in Charleston before heading to Atlanta, GA to study at The Fashion Institute of America, where she graduated in 1972. After graduation she worked in the apparel industry for more than a decade, moving to San Francisco and eventually New York City. She married her husband Peter in 1983, and moved with him to Montclair, New Jersey in 1988, just after the birth of their son.

She wrote her first book, Sullivan’s Island: A Low Country Tale, shortly after the death of her mother in 2000, determined to buy back her childhood family home – the last physical connection she had to her beloved hometown – with the money she earned. The book went on to debut on the New York Times bestseller list at number nine and now has well over one million copies in print. Thus started a bestselling franchise that was often celebrated for its tart humor, honesty and strong-willed female characters that struggled with the real slings and arrows of everyday life: love and heartbreak, fortune and ruin, bliss and disappointment, and the folly of youth and the wisdom of experience.

While her children were young Dottie became a volunteer fundraiser, organizing events for various non-profit organizations around the Metropolitan New York area. Past board service includes The Montclair Art Museum, Whole Theater Company, The Drumthwacket Foundation, The NJ State Council on the Arts and The NJ Cultural Trust. She has also served on the Board of Trustees of the SC Coastal Conservation League and the Parent's Council of the College of Charleston, Bloomfield College (Bloomfield NJ), The Montclair Film Festival (NJ) and The SC Historical Society.

She is the recipient of an Honorary Doctorate of Humane Letters from The College of Charleston, a Doctorate of Fine Arts from Bloomfield College and an Honorary Doctorate of Humane Letters from the Charleston School of Law. In 2015, she was inducted into the South Carolina Academy of authors and has been honored many times for her work raising awareness about domestic violence and for her community service. Dottie was an avid cook, and enjoyed fly fishing the one time she tried it, reading, traveling, and mentoring young writers on the creative process. She divided her time between her home on Sullivans Island and New Jersey.

"For fifteen years I was lucky enough to have an association with a woman full of stories, energy, imagination and most of all wit. Dottie was fearless and vibrant and I will miss her as much as her readers will," said Carrie Feron, Dottie's longtime editor at William Morrow.

If you would like to leave a message, please feel free to visit the GuestBook. 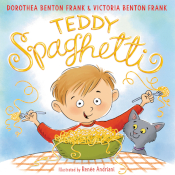 The beloved bestselling author of The Hurricane Sisters and Porch Lights, Dorothea Benton Frank, and her daughter, Victoria Benton Frank, join forces to bring young readers a powerful (and scrumptious) story about a standout kid who learns to stick up for himself and the things he loves.

Dottie's book titled Queen Bee is now on sale. Get your copy today!