"Her books are funny, sexy, and usually damp with sea water." —Pat Conroy

Miracles In The Modern World 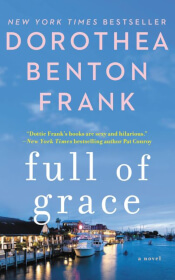 Dot Gets Frank About...

MIRACLES IN THE MODERN WORLD

People always ask me how I get the idea for a new book. The answer is it comes from everywhere. But FULL OF GRACE has the most peculiar genesis of all my books. It must have been two years ago when I was standing in my kitchen watching the news at five o'clock. The newscaster said, "Is this a miracle? When we return . . ."

Well, I love that kind of stuff - angels, ghosts, UFO's, whatever - so I hung around during the ads and waited. The punch line: an American Orthodox Jewish man was preparing for his own demise from a stage four glioblastoma, the big nasty of all brain tumors. He visited the pope, received Communion and had an instant complete cure. I got chills. I called Debbie Zammit, the woman who works with me and asked her if she had seen it and she had. I said, "Who was that guy? That story is a book."

Then I recalled seeing my old high school boyfriend at a wedding a few years before that and he told me he and his wife, Gail had become pretty serious about their faith. Yawn. Cynic that I am I said, well that's good and looked for an exit. He said, no, you have to hear this story. Gail has had Crohn's disease all her life and was seriously ill. She delayed major surgery - one of many operations she's had - because it was the holiday season. The heavy meds her doctor prescribed caused insomnia, she was up in the middle of the night and she picked up her Bible. She opened it to the passage that read something like whatever you ask in my Father's name shall be given . . . and boom! Her ears start buzzing and she feels an electrical shock go through her whole body. She was completely cured - no scar tissue left, she was basically made brand new. Sure. I ordered another glass of wine and wondered why they would lie about such a thing.

I was telling their story to my next door neighbor, Mary Mehan, on Sullivan's Island and she said, well, the same thing happened to my mother. I said to myself, oh sure, here we go again. But her mother experienced a spontaneous healing of her heart muscles through the group prayer of a congregation in church. Another medical miracle.

I thought what if I was sure I would be dead within a year? The best medicine on the planet offered no hope and I was told to make my arrangements. Then, what if a miracle happened to me? I was cured completely to the total astonishment of the medical community. How would that change my life? Would I become spiritual or wildly generous, give up red meat and exercise? How would it effect and change the people around me? Would we be more compassionate, forgiving, or tolerant?

At the time I was at my home on Sullivan's Island without my family. I flipped on the television and what did I see but a Discovery Channel Special called something like The Historical Mary. They were talking about Mary and the Devil and all sorts of bizarre things. One of the guests was Randall Sullivan, a former writer for Rolling Stone. He was talking about his book, The Miracle Detective. I came home to NJ, bought the book and read it. Raised by atheists, he was easily as skeptical as I have always been but by page five hundred, he had become a Catholic. He actually witnessed a spontaneous exorcism in Medjugore, in addition to many other things off the charts.

Okay, then the seed for a book builds momentum and everywhere I look is a Mary story, a miracle story - it was too coincidental to be coincidence. At this point, I am wondering how to tell this story without alienating my readers or offending good people of honest faith. Especially when I have something of a reputation as a sassy girl.

I start having an occasional nightmare that someone's in my bedroom besides my husband and me. And it's a dark thing. Next, I meet a woman who records my book Pawley's Island on tape and completely unsolicited or clued into my thoughts, she presses a Miraculous Medal into my hands and says it's for protection. It was a little unnerving.

The final straw came one night when I was waiting for my husband to come home. Once again, flipping through the channels, I saw a huge image of Our Lady of Guadalupe and flipped back to the Catholic Channel. When I listened to the story of Juan Diego's tilma, every hair of mine stood on end. I knew then that this was the story I had to write. And somehow, make it entertaining, meaningful and plausible.

I hope readers will enjoy FULL OF GRACE told with my usual irreverence and take it in the spirit in which I offer it, which is just to make us think about things. That's about it. Except that several years ago I was scheduled for surgery to remove a tumor. Unknown to me, Gail Fortune, my editor at the time now my agent, had two prayer groups pray for me and something told me to go for a second opinion. I did. The tumor was gone. Go figure.

And it's in the news - on April 11, 2005, both ABC News and The Associated Press reported that there have been honest-to-God miracles attributed to Pope John Paul II. Get your "Google" on - search a little bit. You'll be surprised at what you read... and how it comes to affect your belief.

One last thought. I would love to hear stories of miracles from readers. If anyone has a real lollapalooza, over the top story to tell, please ask them to email me. Thanks!