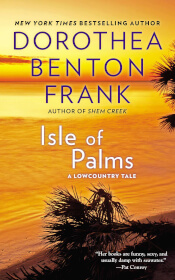 Preview of Isle of Palms

O kay. I had a dream about my mother last night and I always dreamed of her when it seemed that she had a beyond-the-veil itch to comment on my life. She was waltzing with my father at an enormous celebration of some kind. They were smiling and having a wonderful time. I couldn't remember ever seeing Doc so happy or Momma so beautiful. She never said a word. She just smiled at me. I had so many questions I wanted to ask her but for some reason, I couldn't speak.

The next thing I knew, I could sense the light of morning growing all around me. I must have the thinnest eyelids in the world. You know how that is? Well, I realized I was awake. But for a few moments I hung onto the fringes of sleep, trying to retain the details of everything I had seen. I wondered, like I always did, if there was a larger meaning to the dream. Half of my DNA was German, but it was the all American Lowcountry remainder that wore itself out to a frazzle searching for cosmic explanations.

Maybe something was going to happen. Had we all been at a wedding? The old salts said that when you dreamed about weddings it meant the opposite, that something was coming to an end. More change? No thanks.

That was when my feet hit the floor. There was no way another blessed change could happen without me pitching a hissy fit. Big time. We'd had enough change around here to choke a goat. We had made it through Thanksgiving and were now trying to focus on Christmas. Thanksgiving had been enough to make anybody's head explode. Like Bettina says all the time, it's enough already. Bettina's from New York. She's our manicurist and you'll love her when you meet her.

There's so much to tell you about.

Anyway, next I got myself a cup of coffee - ground Columbian beans with a piece of split vanilla bean thrown in the filter - and went outside to get the paper and look at the sky. The first thing I noticed was that my blasted garden still continued to climb all over my trees and my house. Every night it took over a little more. Not that it wasn't pretty. Hell no! It was nothing less than a horticultural miracle. Abnormal in the extreme. Jack's beanstalk. But the sky looked fine, no storms coming or anything like that. In fact, it was going to be a beautiful day. I stood there watching the sun rise on the Isle of Palms. Right then and there, I decided that my dream had been a message that it was way past time to tell my story. So, here I am.

Fans of Anne Rivers Siddons, Pat Conroy, and Fannie Flagg will love this big-hearted saga set in South Carolina's Lowcountry. Shot through with equal parts of down-home humor and truth, this hardcover debut by the author of Sullivan's Island and Plantation stars the irrepressible Anna Lutz Abbott, a hairstylist who's been making the best of things for entirely too long and determines to return to her roots on the Isle of Palms. Of course there are complications that threaten to disrupt Anna's new life -- her daughter returns from college looking like a Goth, a sexpot neighbor has designs on her father, and a handsome New Yorker with boyfriend potential appears on the scene. At the end, readers will cheer with Anna as she reflects, "I think all the failures and victories of my life have come together pretty nice -- like a string of graduated pearls."