"Frank's narrative is heavy on healing—physically, mentally—and the importance of family..." —Publishers Weekly
Miriam's escaping to the enchanted and mysterious land of Sullivans Island, deep in the low country of South Carolina, a place where she can finally get her head on straight—and figure out that it's not pride that's going to keep her warm at night... 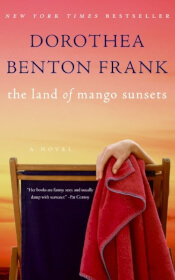 Preview of The Land of Mango Sunsets

W e called it The Land of Mango Sunsets. None of the old islanders knew what we meant by that as they had only ever heard of mangoes. Bottled chutney perhaps, but that was about the sum total of their experience with a food that was so foreign. But I knew all about the romance of them from my earliest memories of anything at all. My parents had honeymooned in the South Pacific, which in those days was considered a little reckless, certainly titillating and above all, highly exotic. Every morning they left their beds, still half dreaming to find a tray outside the door of their bungalow. They would bring it behind the curtains of mosquito netting and into their bed. Still in their nightclothes, my mother's hair cascading in tendrils and my father's young beard stubble scratching her young complexion, they would burn away the sour paste of morning breath with a plate of sliced mangoes, dripping with fleshy sweetness, a pot of strong tea and a rack of toast. From then on, mangoes were equated with love, tenderness and hopeful beginnings and we spent our lives looking everywhere for other examples of them.

On the island where my family had kept the same cottage for over one hundred years, there was a sliver of time late in the day when the sun hung in the western sky, after it stopped burning white and before it dropped into the horizon. For just a few minutes it would transform itself into a red orange orb. Wherever we were on the island, we would all stop to face it and my father would say to my mother, look Josephine, the mango sunset. We would wonder aloud about the majesty of the hand that shaped it. About heaven. About where our ancestors were and could they see us looking for them in the twilight. I believed that they could.

As if in a postscript, great streaks of red and purple would appear on some evenings and on others streams of light, burning through clouds, dividing the horizon into triangles of opalescent colors for which there are no words. The Land of Mango Sunsets was a force all on its own. And whether you understood mango sunsets or not, the ending of most days in the Lowcountry of South Carolina was so beautiful it would wrench your heart.

On Sullivans Island there were of a chorus of bird whistles and song to begin and end each day. On the turning of the tide there were endless rustling fronds brushing the air in a windy dance only they understood. And perhaps most importantly there were the leathered but loving hands and peppermint breath of old people, always there to help. The pungent smells of salt and wet earth haunt me to this day because you see, before I could speak, I could smell rain coming, sense a storm, and knew enough to be afraid of fast water that would spin you away from life in an instant.

It was there on that island that I learned about the power of deep love and came to believe in magic, only to forget it all later on. But years later, the struggle came to remember, a struggle worth the salt in every tear shed and the blood of every bruise to my spirit.

Review: The Land of Mango Sunsets

Miriam Elizabeth Swanson's life is one big pity party. Her husband of 20-plus years has traded her in for a newer model, her grown sons avoid her like the plague, and, likewise, her so-called society friends treat her like she's the poster girl for the Ebola virus. If all that weren't bad enough, her once-deluxe Manhattan town house has been carved up into apartments because she needs the rent to make ends meet, and her mother has morphed into a pot-smoking, aging hippie down at the family homestead in the Carolina Low Country. But when a new young tenant is brutally attacked by her lover, who happens to be married to one of Miriam's erstwhile friends, Miriam experiences an epiphany that transforms her from a dour, nay-saying shrew into an upbeat, understanding confidant. Shedding her emotional baggage along with, let's face it, a few pounds, Miriam learns the redemptive power of forgiveness and turns her life into a joyous celebration of family and friends.

The Land of Mango Sunsets