"hilarious and wise" —Pat Conroy on Sullivan's Island
Set in the steamy, stormy landscape of South Carolina, Sullivan's Island marks the debut of an exquisitely talented writer—and tells the unforgettable story of one woman's courageous journey toward truth. 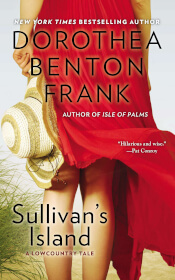 I searched for sleep curled up in my quilt - the one made for me at my birth by my paternal grandmother's own hands. Southern women have always taken pride in the excellence of their needlework. Over the years it had been lovingly abused then its edges rebound and its tears carefully mended. The design was my grandmother's own - so unique - a beautiful pastel colored garden, with a stream of gray and pale blue silk water running down its center. As a child the scene had seemed so real to me that I could imagine myself there, climbing the garden wall of stone and pale green ivy and then wading in the water's edge.

The front was pieced together from tiny swatches of fabrics to form flowers, birds, trees and shrubs. She had probably collected those swatches for years. The back of the quilt was now ivory silk, blind stitched over its original backing of cotton. Hundreds of tiny French knots gave the quilt texture and dimension. Its fragile state was so urgent; it should have been mounted as a wall hanging for the sake of preservation. If there was one thing that Charlestonians did it was to preserve. But, I couldn't retire it to an art object. I preferred to wrap myself in its cool folds, wondering if my grandmother - the one I had scarcely known - was trying to tell me something.

I turned in our ancient creaking bed - my parent's bed - solid mahogany, with carved shafts of rice decorating each of its four, red patina posters, a symbol of long gone plantation crops. We had once grown the most desirable rice in the world in Charleston's rice fields - Carolina Gold. The bed was a souvenir of the past.

I remembered the day we had carried it into the house in pieces, up the steep stairs from the front hall to our bedroom - Tom and I - and together we had assembled it, fitting the neatly labeled pegs in just so. There was not a single nail in it - only handmade pegs. We had just bought our house then - an old Victorian in the historic district of downtown - and my sister had insisted that we have the bed as a housewarming gift.

My mind moved on. I tried to convince myself that the gentle, rhythmic snoring of my husband was in fact the sound of the tide coming in on Sullivan's Island. The sounds of the Island had never failed to help me fall off to deep sleep. But that night no amount of imagining or remembering brought the rest I so desperately sought.

Set on the coast of South Carolina, this book explores one woman's journey from a contentedly married middle-aged wife and mother to a newly divorced woman looking back on her past for reassurance and to the future for some means of regaining her self-esteem. The story opens with Susan walking in on her husband and his young lover, a shocking surprise to her and an annoyance to him. Susan escalates the situation by throwing them both out, packing her husband's toiletries, and then beginning a new chapter. The tale moves back and forth between present and past as Susan reminisces about her South Carolina Lowcountry upbringing, with all of its "geechee" and Gullah cadences and the African American housekeeper who raised her and her siblings. Throughout, Susan draws strength and support from her sister, and her appreciation for her roots deepens as she tries to come to terms with divorce and raising a teenager. Frank's novel deals with dating, divorce, family life, and teenagers in an outrageously funny way. Conversely, there is a bittersweet nostalgia that permeates a life that seems familiar to us all. Joyce Bean does a highly credible job of evoking Southern pluck and sass as she moves easily among characters. Those who enjoy Pat Conroy or Anne Rivers Siddons will not be disappointed. Recommended for all public libraries.